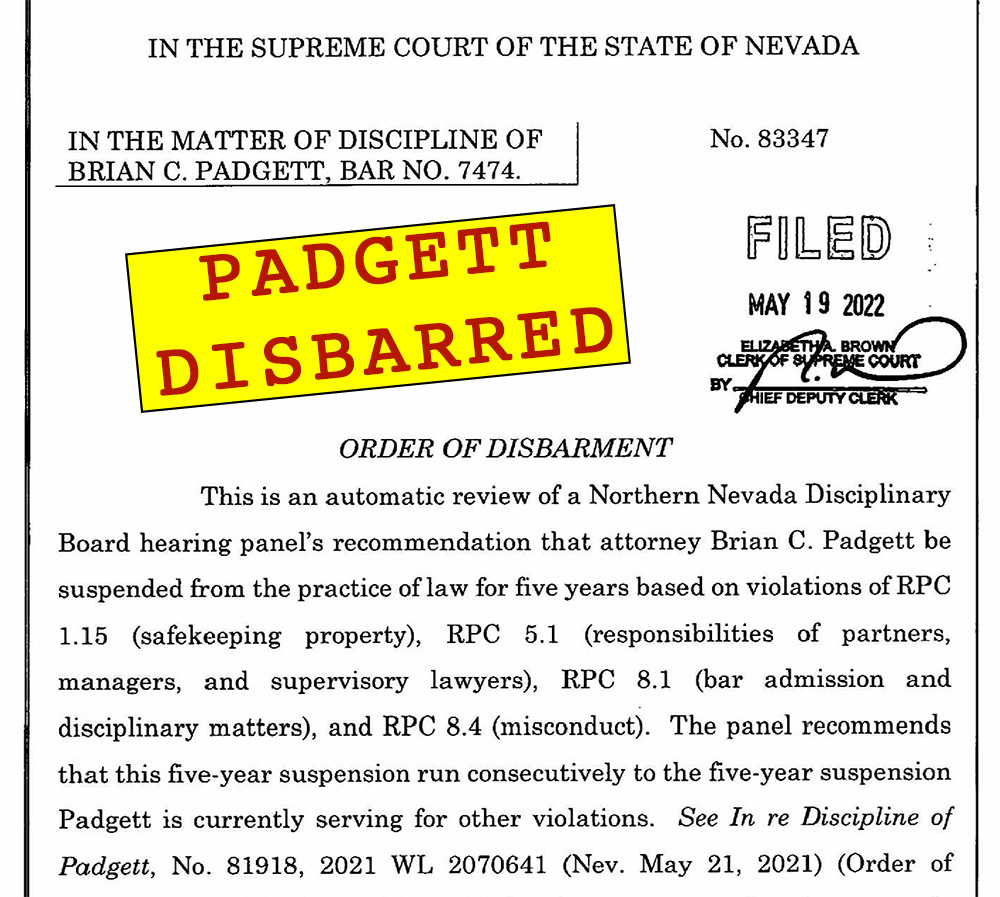 The time of reckoning has come for Brian C. Padgett, Las Vegas attorney.

In an order of disbarment (Padgett Disbarred.pdf) handed down by the Supreme Court of the State of Nevada, the Court upheld the recommended five-year suspension to run consecutive with a previous five-year suspension already handed down. This effectively ends Padgett’s career as a Nevada attorney, barring some miraculous “Hail Mary” comeback efforts.

Chief Justice of the Supreme Court Ronald David “Ron” Parraguirre, wrote in the order of disbarment:

“The panel found, and the record supports, eight aggravating circumstances (prior disciplinary offenses, dishonest of selfish motive, a pattern of misconduct, multiple offenses, bad faith obstruction of the disciplinary proceeding by intentionally failing to comply with rules or orders, refusal to acknowledge the wrongful nature of conduct, substantial experience in the practice of law, and indifference to making restitution) and no mitigating circumstances.

“Considering all the factors, especially the fact that Padgett is already serving a five-year suspension for other offenses, we conclude that the scope of Padgett’s misconduct and the aggravating circumstances warrant an upward deviation from the baseline sanction. Accordingly, we disbar attorney Brian C. Padgett from the practice of law. Such disbarment is irrevocable.”

Sums it up quite well, in our opinion. 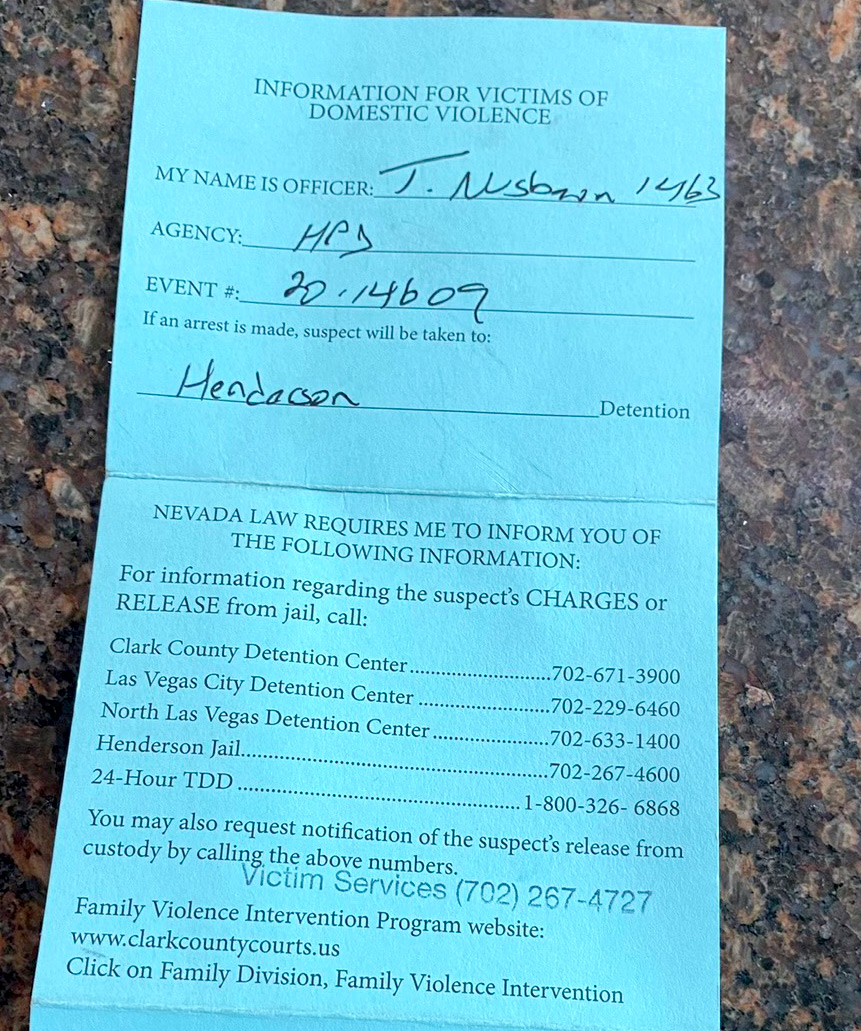 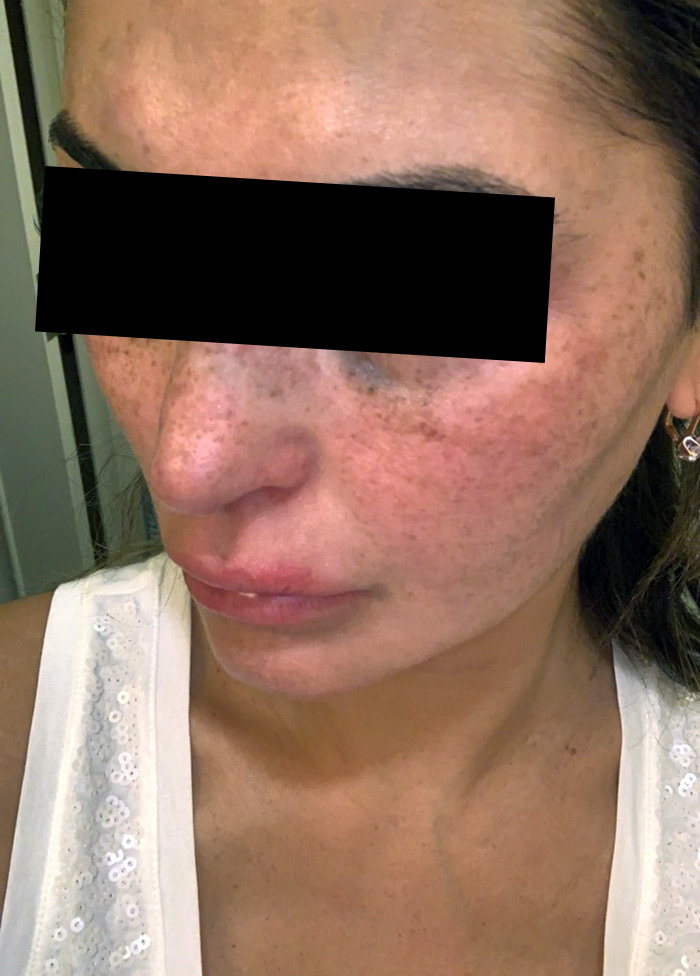 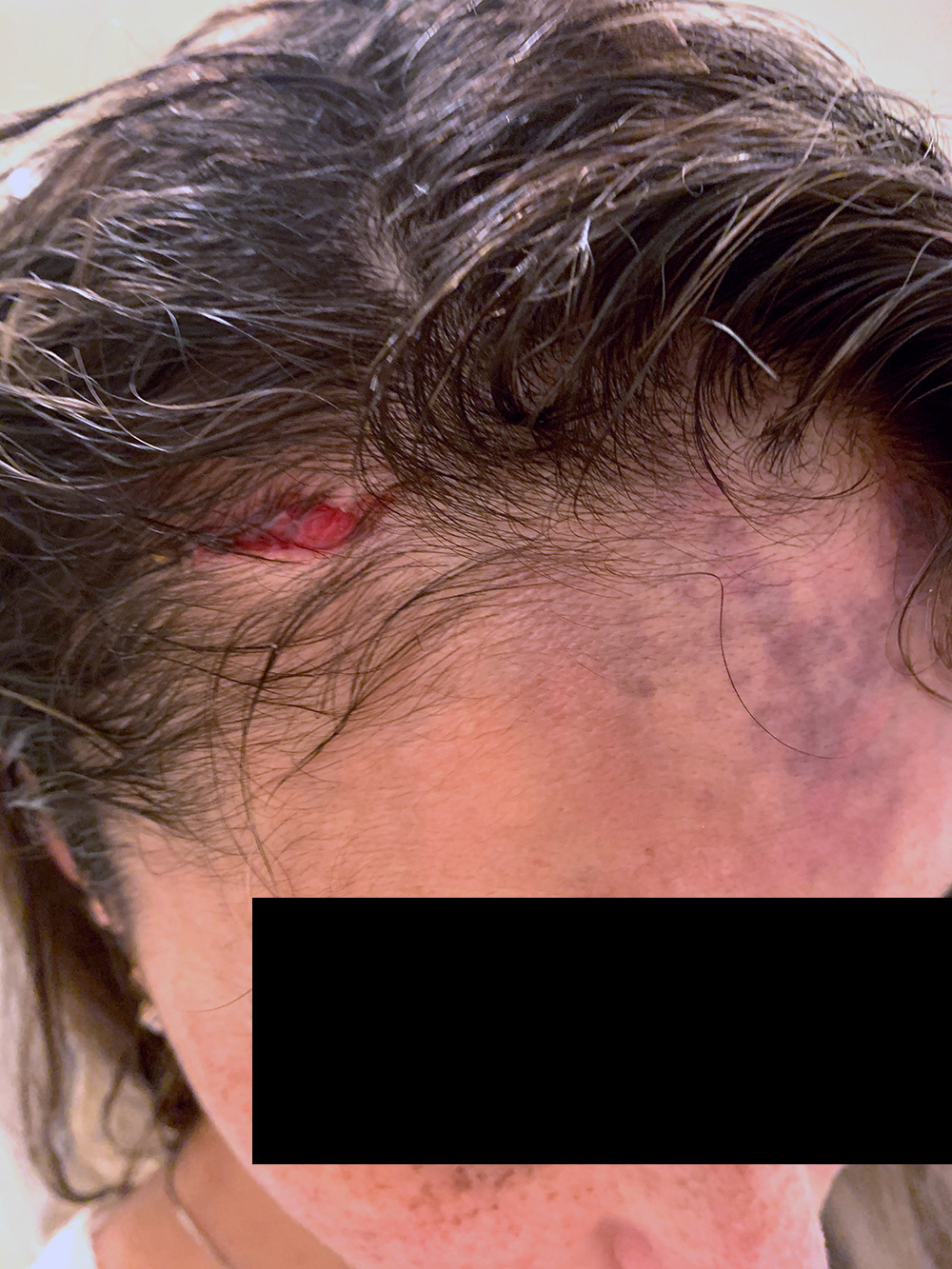 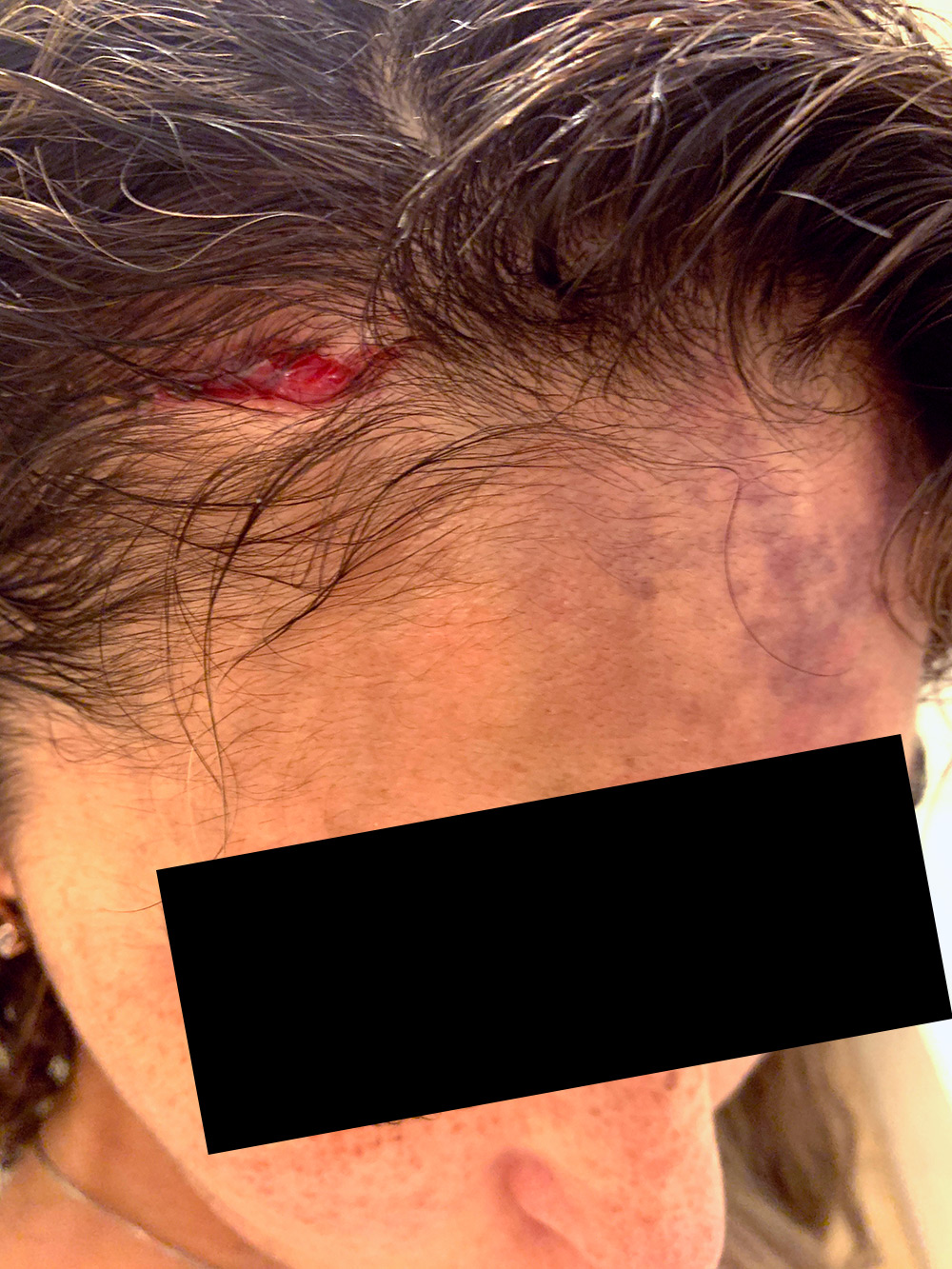 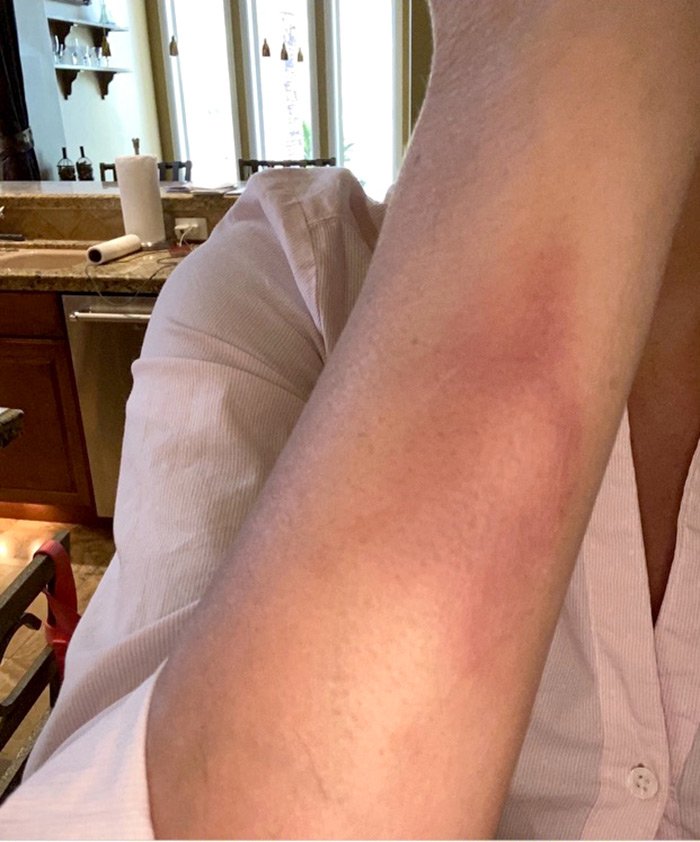 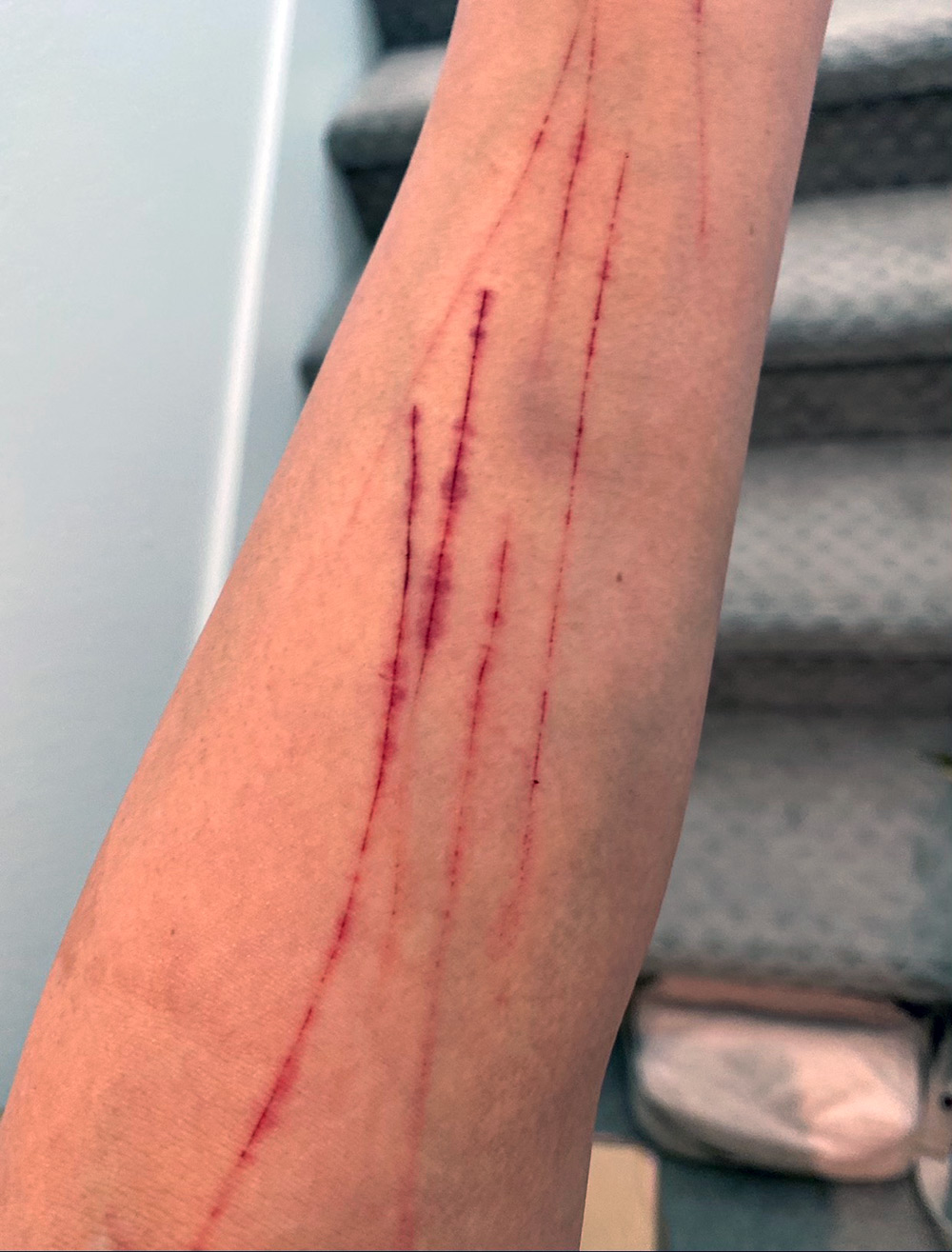 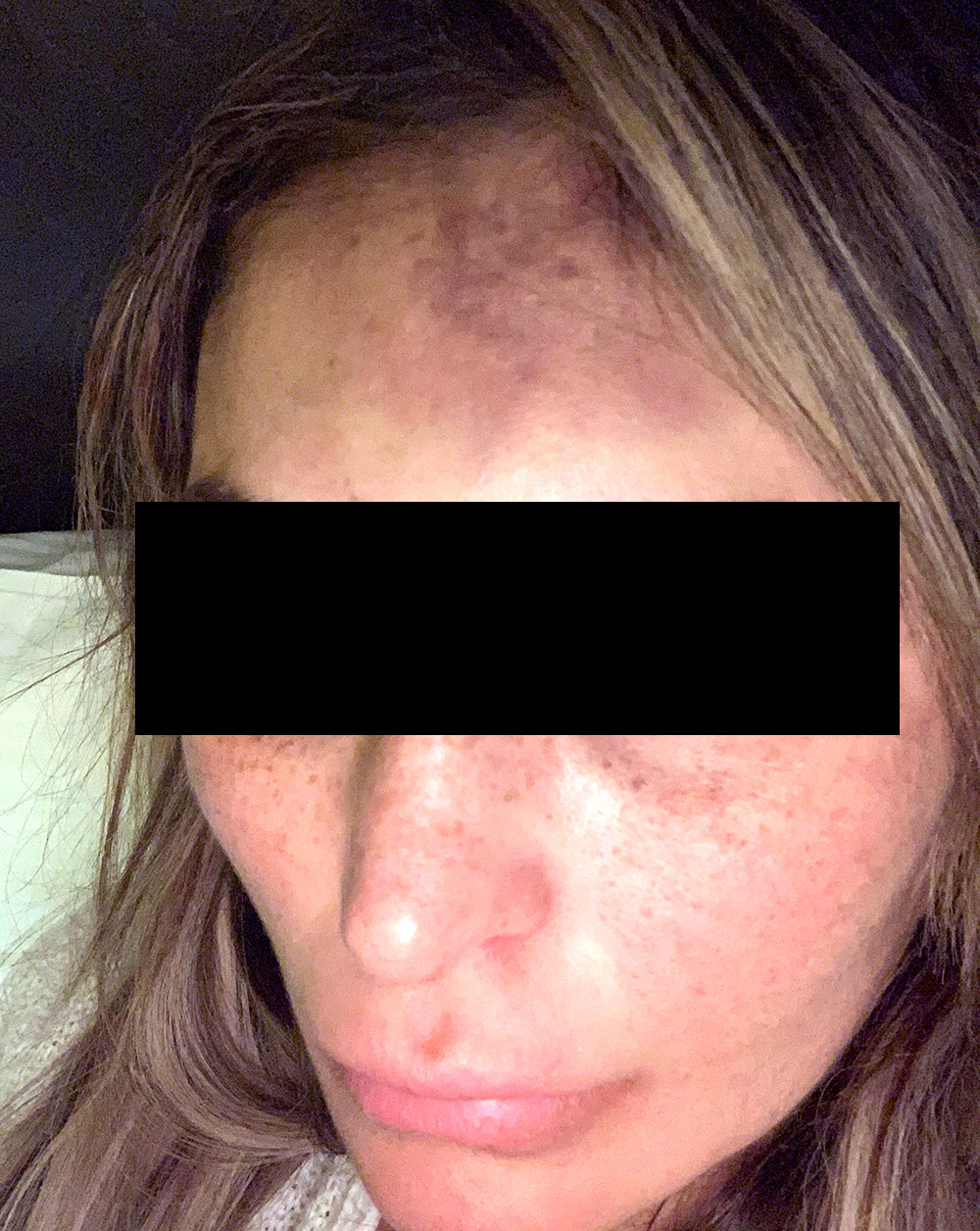 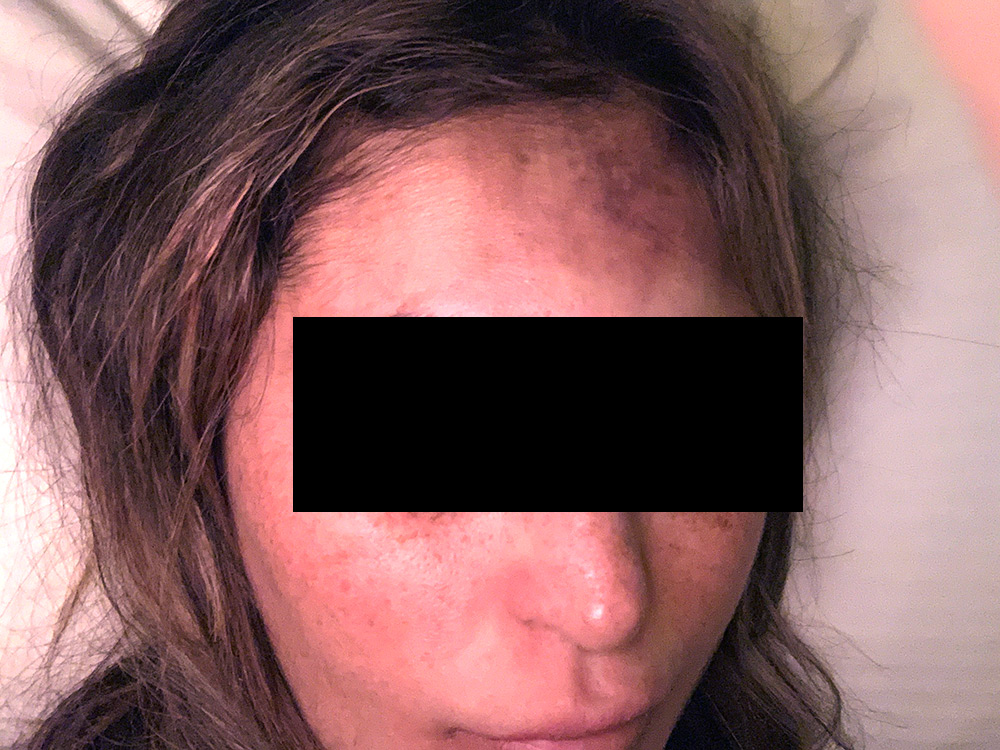 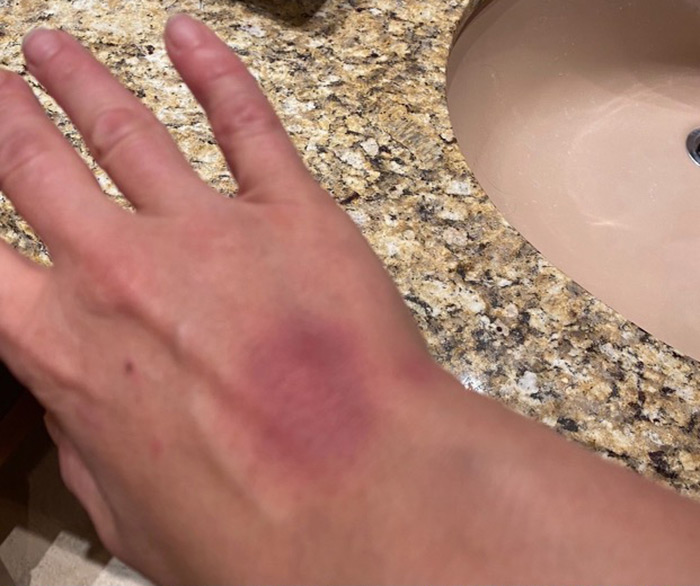 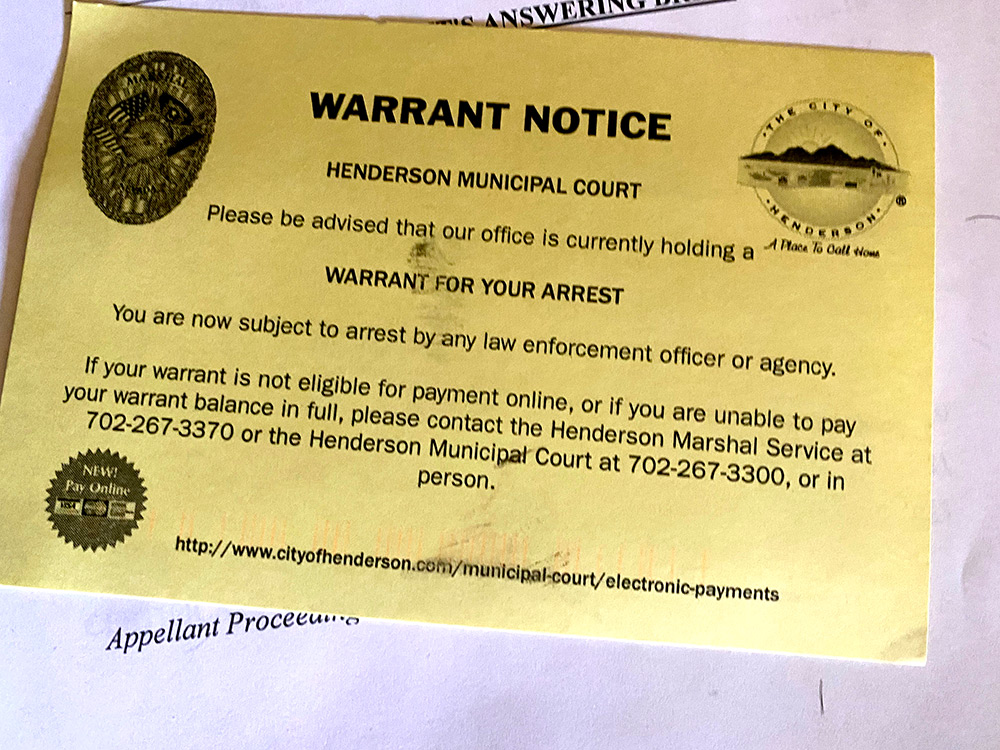 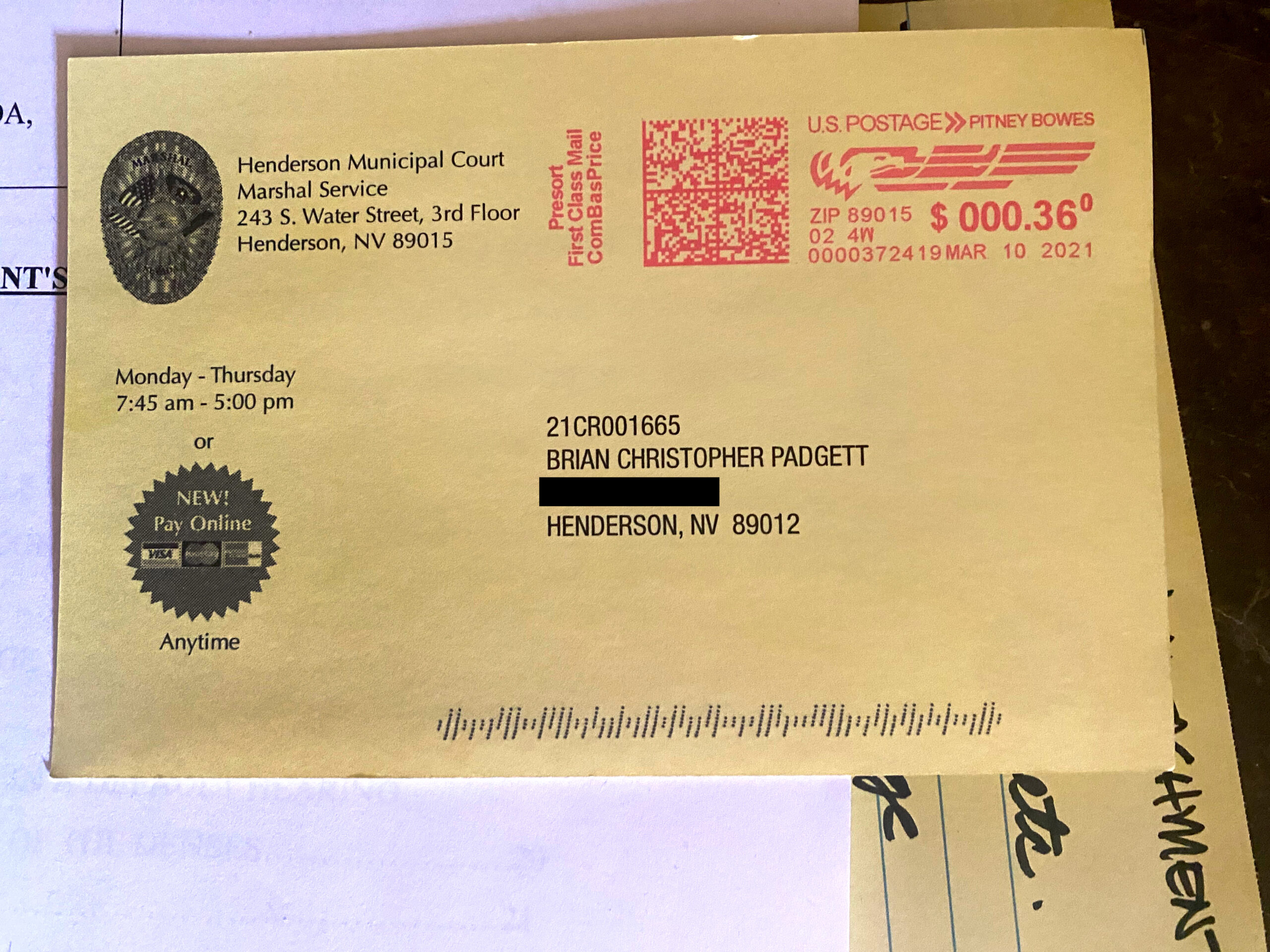 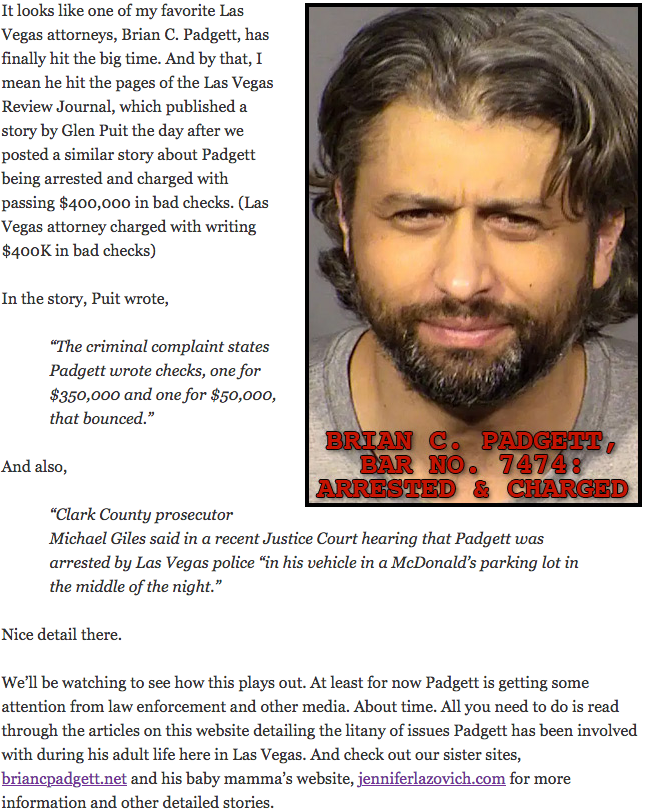 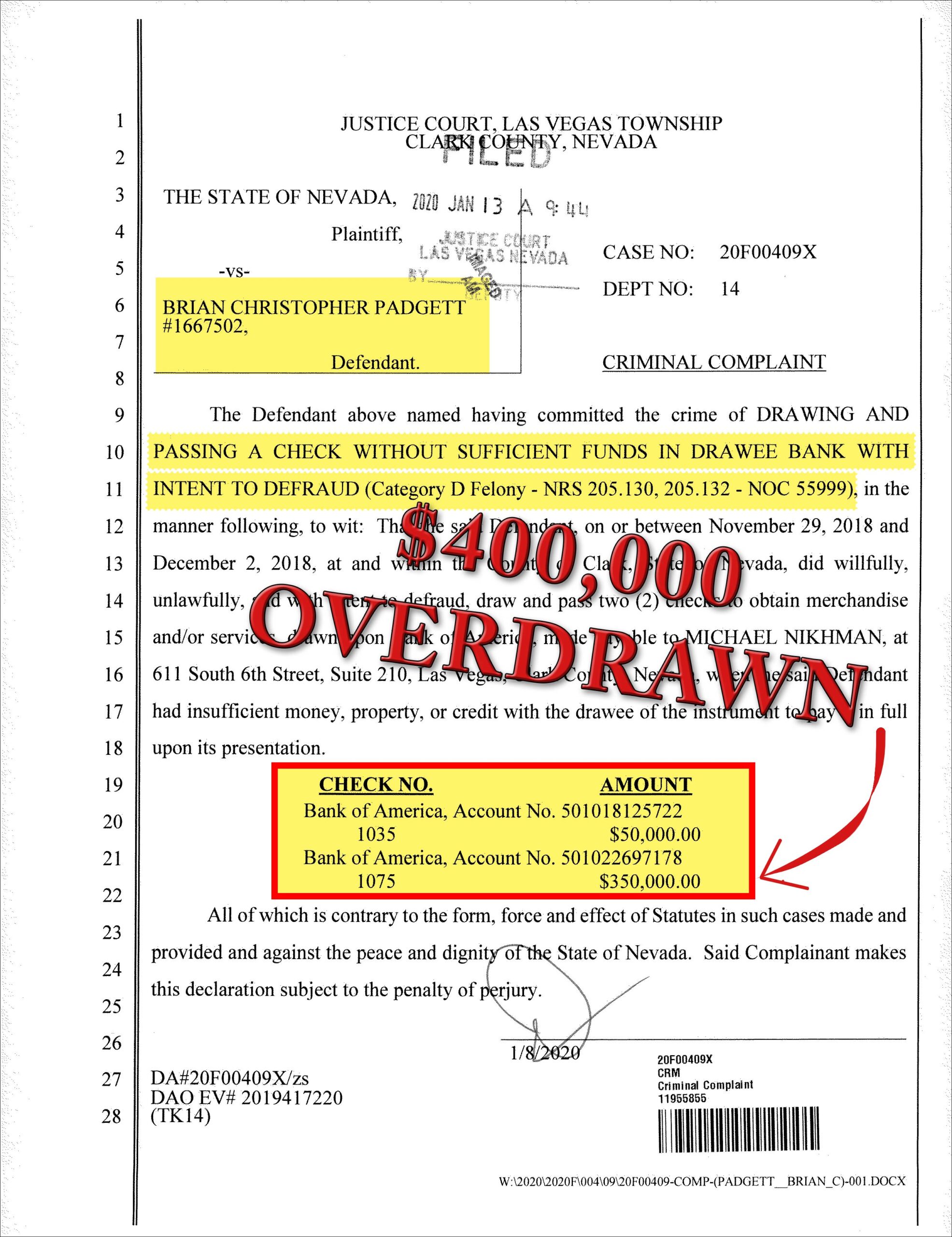 You can’t hide, Brian Padgett. Especially when you “hide” in plain sight in a public restaurant. I’m not sure how you have the stones to show your face publicly after everything you’ve done. (For those new to this website, please scroll through the posts to get an idea of the dirty deeds this Las Vegas lawyer has done. How he hasn’t been disbarred yet is beyond me.)

Brian Padgett’s cowardly acts were recently called out by former employee Christopher Carlough. Carlough, a former employee of Padgett’s at CWNevada, bumped into him at a restaurant and proceeded to go on a rant against Padgett and filmed it all on his phone. Priceless stuff. We think the video speaks for itself. By the way, we have full permission, in writing, from Carlough to use this video. It’s presented in it’s entirety, unedited at the top of this post.

You’ll notice that Padgett didn’t try to rebut Carlough or fight back until half of the restaurant staff came to try to quiet the disruption.

Attention Natalie Lieberman of Toronto, Canada, A K A “Nasty Natalie”: Brian Padgett did wake up with a dead girl, Katie Howard, who was someone’s daughter. Not only is Brian less than trash, to refresh your memory, go to the audio where Brian offers a man $100,000 to get rid of her body: Brian Padgett 911 Call. (BTW, “Nasty,” where did you get the money for the old BMW you’re driving?) 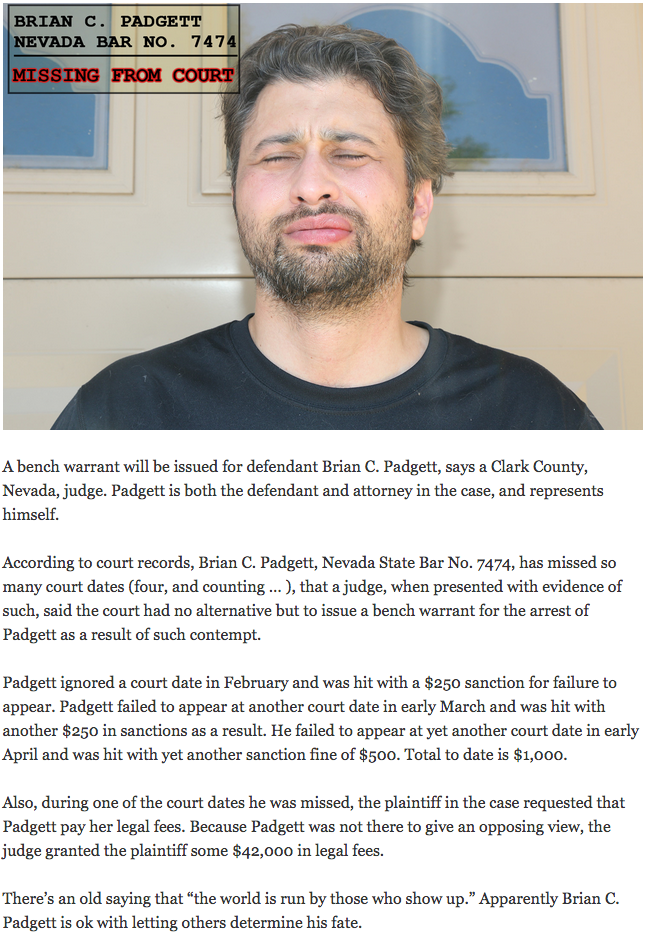 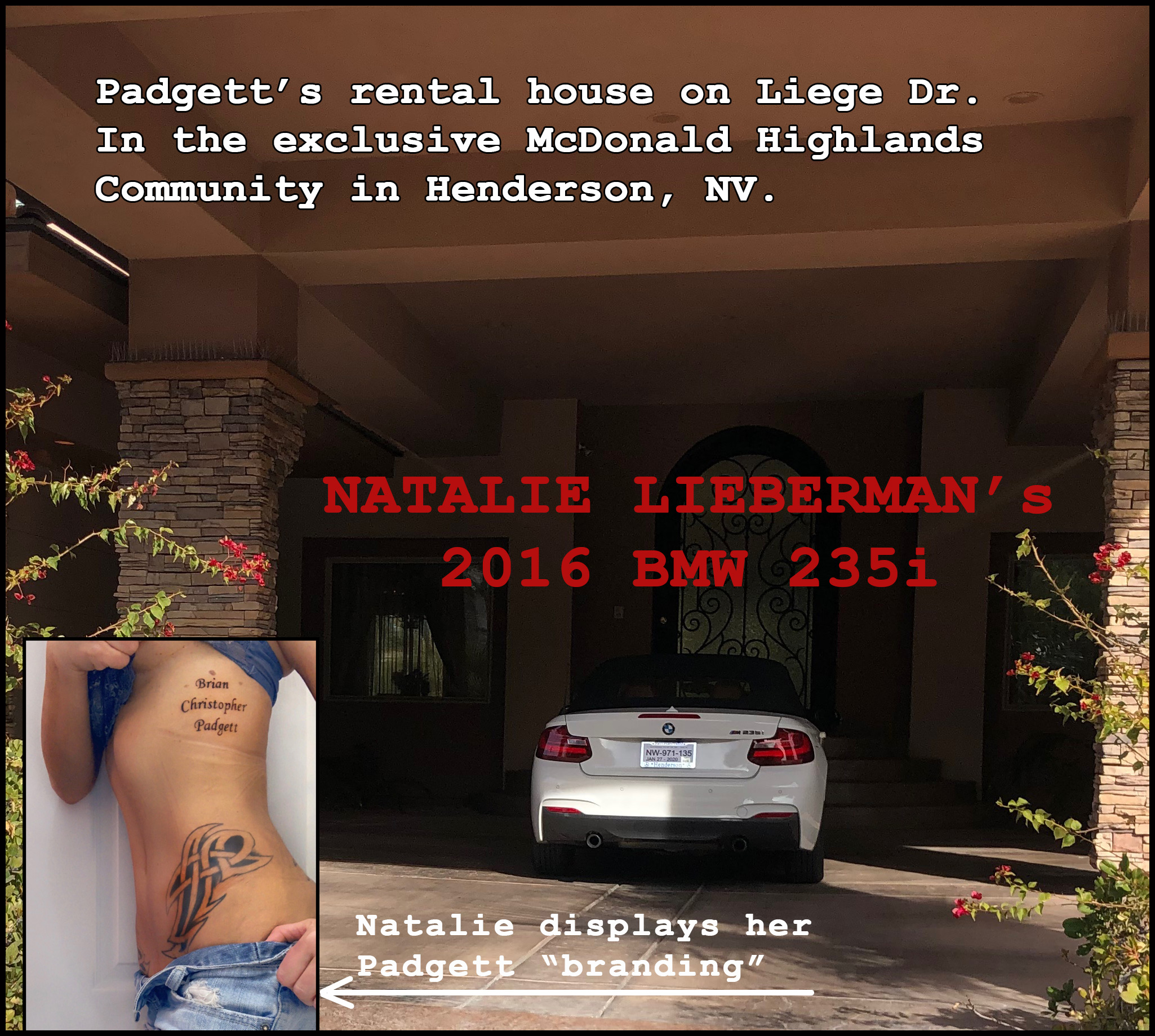 A CALL FOR TRANSPARENCY: Brian C. Padgett claims a lot of things that clearly aren’t true. He has scammed senior citizens (ages 69 and 75) of more than a million dollars. He lies, and he’s clearly a two-faced scumbag with no morals. He is the very definition of a morally bankrupt con man.

Padgett’s list of financial victims goes on and on. I pledge to do billboards and mailings about this con man and his duplicity in the overdose and death of Katie Howard. I am truly disturbed about how a cocaine-using attorney, who admits his crimes to law enforcement, can still walk the streets. Additionally, how he has been able to hold any sort of license for marijuana on any level is totally confusing. My quest for seeking answers will continue.

For example, how are Brian C. Padgett and his supposed girlfriend, *“Nasty” Natalie Lieberman, 45, able to afford a 2016 BMW 235i convertible coup? They just acquired it in the past 30 days as you can see from the temporary tags in the photo above.

(*I call her Nasty Natalie because of her personal behavior that I have first-hand knowledge of. Her birthplace, according to her passport is Azerbaijan.) 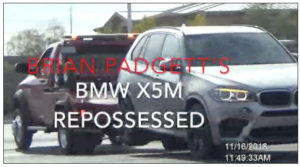 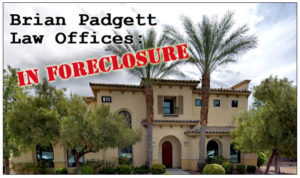 Padgett is a man who, according to court documents, owes an estimated 100 debtors $50 million. Padgett also had his own BMW repossessed (see our story: Padgett X5M BMW Repossessed), and the property housing his law office is in foreclosure. Up until this point, Padgett has been seen only driven around by Laurel Cruz and occasionally Connie Little. With the BMW acquisition, Nasty Natalie Lieberman must be his own live-in chauffeur.

Nasty Natalie, who lives in Toronto, Canada and Brooklyn, New York (and who, during my review while spending a great deal of time with her, and based on her statements to me in a recorded conversation) has no visible means of income.

So how can this couple afford a 2016 BMW 235i convertible coup? I mean given the backgrounds of these two, who would approve that?

Let’s check this stuff off just to make sure you’ve got it down:
√ $50 million in debt
√ Some 100 debtors
√ BMW X5M repossessed
√ Girlfriend who admitted to no documentable income
√ Newly acquired 2016 BMW

How does that happen? Seriously?

I know plenty of people who don’t have anywhere near that amount of debt weighing them down who could never qualify for a loan or a lease for a BMW 235i convertible coup.

The BMW is in Nasty Natalie’s name, who has no verifiable, visible income suggesting that she might be able to afford a car like that.

When are people – particularly in law enforcement – who know about this man, his actions, his criminality, his irresponsibility, and his deceit going to wake up and smell the coffee, if not the stench from Padgett himself?

How does this guy keep getting away with this stuff? I’m looking for answers. 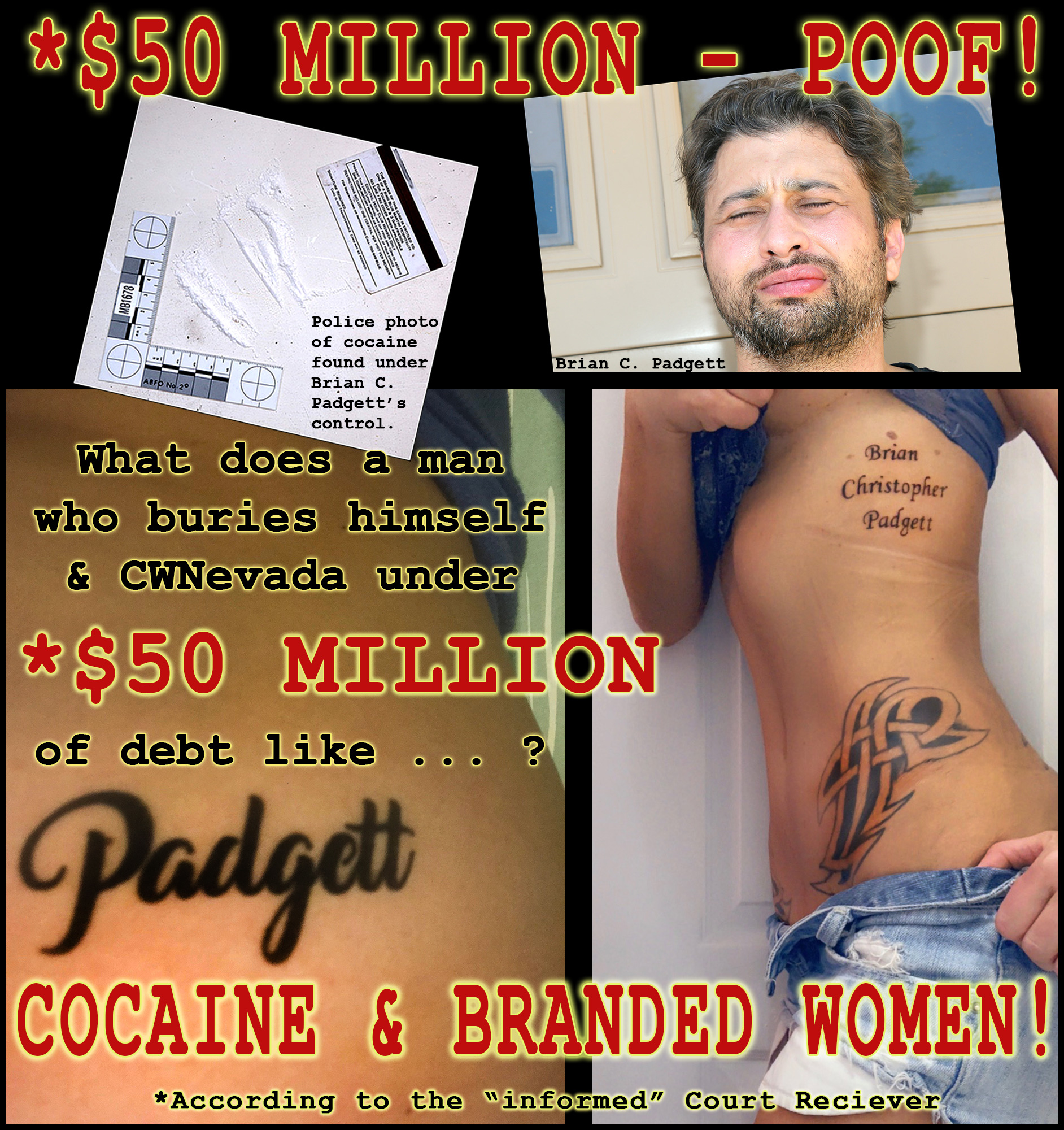 (You can click on this image to see it full size for more detail.)

Brian C. Padgett was quick to tout how much women loved him and texted out these photos showing two woman he was involved with. The woman on the right has been identified as Natalie Lieberman, 45 years old, lives in Toronto, Canada and Brooklyn, New York.


Rumors have been circulating that on Lieberman’s 45th birthday, Dec. 26, she and Padgett had a major fight and falling out.

Yes, those are real tattoos. Natalie now is officially pissed. Especially now knowing the kind of person Padgett really is.

Padgett was quite fond of saying that she was his – “forever” – and was quite pleased that a woman would get his name tattooed on her body.

Now Natalie is indelibly tied to a man who has run up $50 million in debt to about 100 debtors according to an official “informed” Court Receiver. See story here: BOMBSHELL ALERT! $50 Million Owed to Over 100 Creditors

And regarding that court appearance yesterday (Dec. 30, 2019), I’m told that Padgett hid in the corner of the courtroom like a coward and only came forward to address the judge after he dismissed everyone. The case? The judge approved the motion to move forward pursuing claims against Padgett and his businesses, kicking him (CWNevada) out of their location at Blue Diamond Road:

Sorry, Brian, I’m not sorry that I don’t feel sorry for you. Things could have been different, but like most everything else in your life, in my humble opinion (IMHO), you have f***ed everything up. 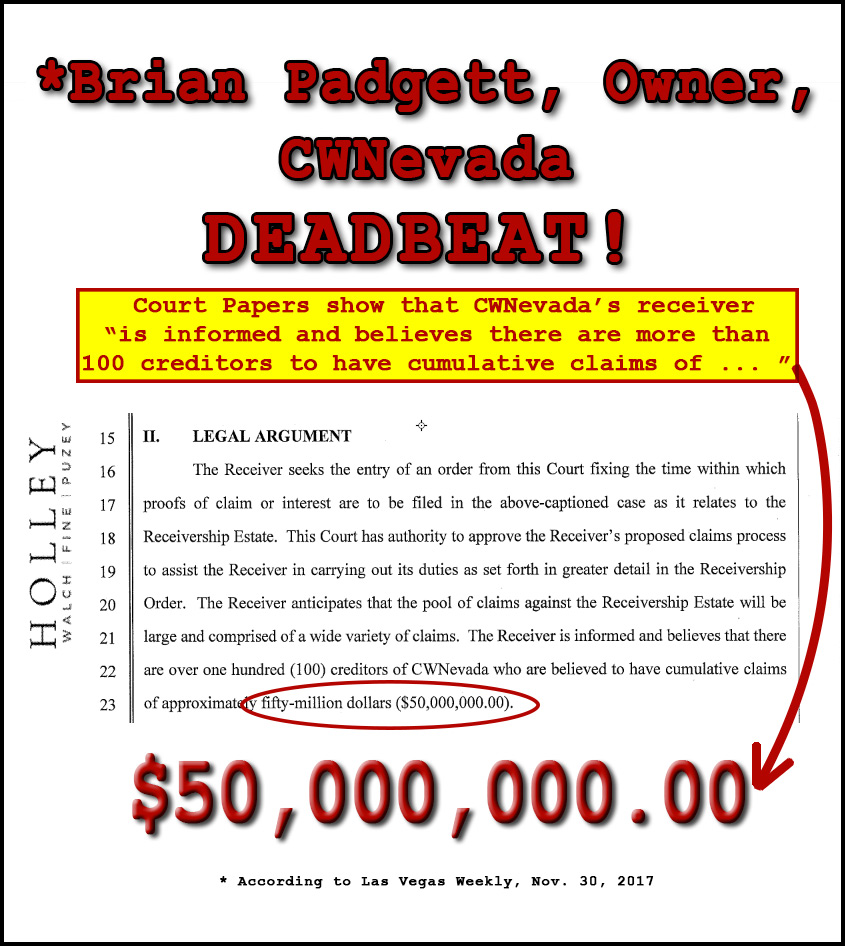