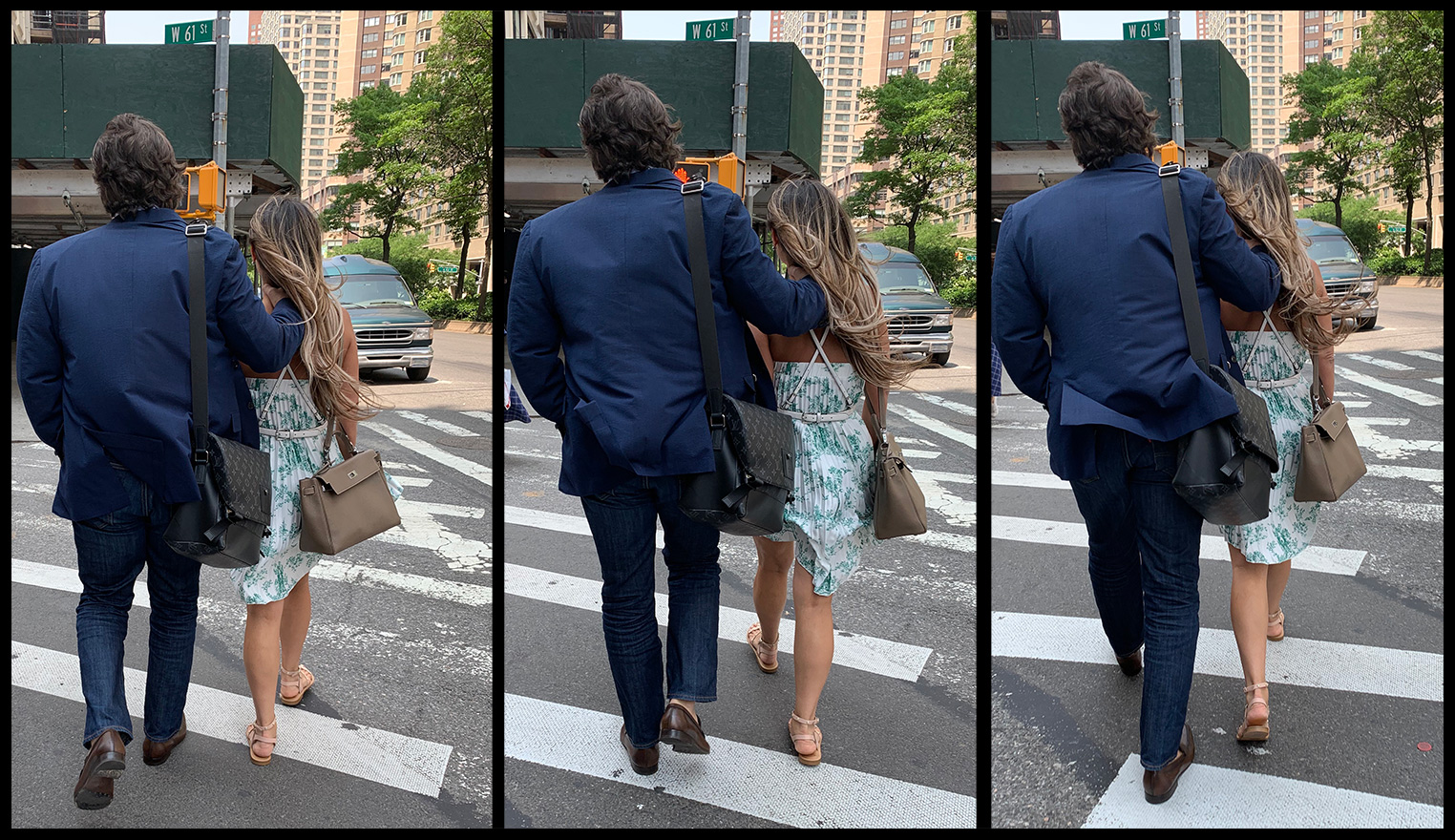 Natalie Liberman (I call her Nat – or “Gnat,” as you wish – for short) is the kind of person that you often see depicted as a “femme fatale” in the movies – a dangerously seductive woman who at the same time is a somewhat contemptable character. You’ll recognize the type – a golddigger with no moral compass, out to get whatever she can get from whomever she thinks she can get it from at whatever personal cost she needs to pay; someone with no shame, in other words.

I got to know the true Nat over time as I watched her relationship with Brian Padgett play out. I was there with them both in New York City (those are my photos you see above of the both of them from behind crossing W. 61st St.) as we spent time there. Although I guess I was a bit of a third wheel, I hung out with them as we went to eat at a fairly well known restaurant off Park Avenue, a place called Cipriani’s.

I watched them talk, I spoke with Nat quite a bit, and as time went on, it became increasingly clear to me exactly the kind of woman she was.

A screen shot of the text I received from “Nat” – Natalie Liberman. (Yeah, you sent this by mistake … right!)

Nat asked for my phone number, and I gave it to her. Not long after that, she sent me a text message (see the screenshot image at right). I must say I was initially shocked and surprised, but then I thought about the woman I was coming to know and I realized that it was exactly the way she played men. And I do mean played.

During the time I was getting to know her, I paid for a trip for Nat to go on an interview, and I also recorded several hours of the many conversations we had. Much of those conversations were totally bizarre. In one of the conversations, Natalie detailed some of Brian Padgett’s alleged strange, deviant behavior. A transcript of this and possibly other conversations will be forthcoming.

She also spoke to me about living in Canada, which is where she currently resides (she has both a Canadian and U.S. passport), and how she was able to get income from the Canadian government due to disability. What that disability is, I’m not quite sure of, but I couldn’t discern any telltale disability about her – at least physically – at all. (You can kind of see that from the posted text photo.)

In addition to the revealing photo of her semi-nude selfie that she sent me, she also sent photos to me of her driving around in a late model Porsche, which has a red interior. She laughingly admitted that some other guy in Canada pays for that. She said, and I’m paraphrasing here, that she “took care of” him, so to reciprocate, he “took care of her.”

Natalie also referred to Brian Padgett as, “broke ass” and that he didn’t have enough money for her. When I asked her why she stayed with him, then, she said that she “just liked him.”

I think you’ve gotten a good picture of how things work with Natalie “Nat” Liberman. She was trying to set her sights on me, but I was always suspect of her and got wise to her game pretty quickly. When I sensed she was after me for more than just a casual friendship, I told her I would buy her a meal and a plane ticket, but that was it.

She may look pretty in some of the photos here, but here’s how I would describe her: She’s short and thin, pigeon-toed but attractive, a wannabe social climber and golddigger who is looking to get the most financially out of a relationship that she can, in my opinion. In the end, she may be pretty, she may have a great body, but her character and morals just don’t measure up. That’s my opinion after having spent quite a bit of time with her, after having seen her in action, and after having spoken to her quite a bit.

Just to wrap things up, I once asked her how she paid for everything she had and what she did. I just wanted to see if she had any sort of significant, provable income for the lavish lifestyle she seemed to be living as an almost 44-year-old woman. She kind of stammered out that it was her parents who paid for it all. Really, Nat? I kind of see things pretty clearly and in a much different way.