An open letter to Jennifer Lazovich, Bar No. 6714:

As a lobbyist, of all people, you should know the importance of openness and transparency. I have been told by several sources that the wedding/engagement ring you have (no one’s really clear on which it is) was a gift from Brian Padgett from back in 2016 — but I also heard that you had paid for it. As a footnote, in state court, Brian Padgett got up and told the judge that he’s married and has been raising his family in Clark County.

Out of respect for you, I’m giving you the benefit of the doubt to clear up this mystery. Did you pay for it, did Pagett pay for it, and if so where did the money come from?

I’m told the arrival of the ring allegedly coincided with huge amounts of investment money received in 2016, which to my knowledge, according to the lawsuits, has not been paid back.

Clearly, as it stands, you appear to be one of the largest stock holders of CWNevada LLC, according to paperwork filed with the state of Nevada (see document below), which is now in receivership. As a lawyer, you understand better than anyone, the dire situation that has to exist in order for a receiver to be in place.

In closing, clear up the mystery. Where did the money come from and how was this ring paid for? Again, as I said, you’re a lobbyist and you understand transparency. Just so there’s no confusion, Brian Padgett took me into the store where the ring was purchased. I will just describe the owner of the store by his first initial: M. So don’t play games. The information is really just a subpoena away.

One big question: are you married to Brian C. Padgett?

I have personally seen the ring on four occasions. I would guess it to be 4-6 carats, minimum. If you claim you no longer have it, where did it go, and how much did you get for it? Again, if you are this wonderful, upstanding attorney and lobbyist, transparency should not be an issue, especially with you being tied to all the scrutiny and lawsuits that are in play with Brian Padgett right now, who admitted to using cocaine and who is so deep in debt he can’t see the sun. His current situation is that he’s surrounded in controversy and lawsuits.

As a matter of fact, let me take a minute and outline Padgett’s current situation:

A. He wakes up with a dead woman who OD’d in the room after admittedly doing cocaine with her overnight.
B. He’s tens of millions of dollars in debt.
C. He’s embroiled in enough litigation to engage 10-15 law firms.
D. He’s made threats to physically harm a number of people.
E. Let’s not forget the DDoS attack on this very website.

From days gone by, it reminds me of something that I used to have hammered into my brain:

Specializing in cannabis; land use, zoning; government affairs, as well as legislative affairs. 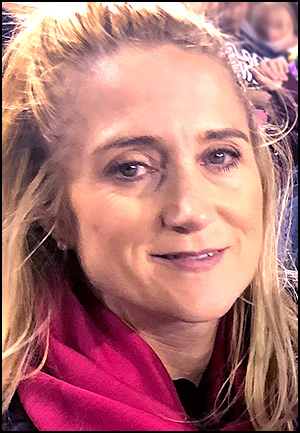 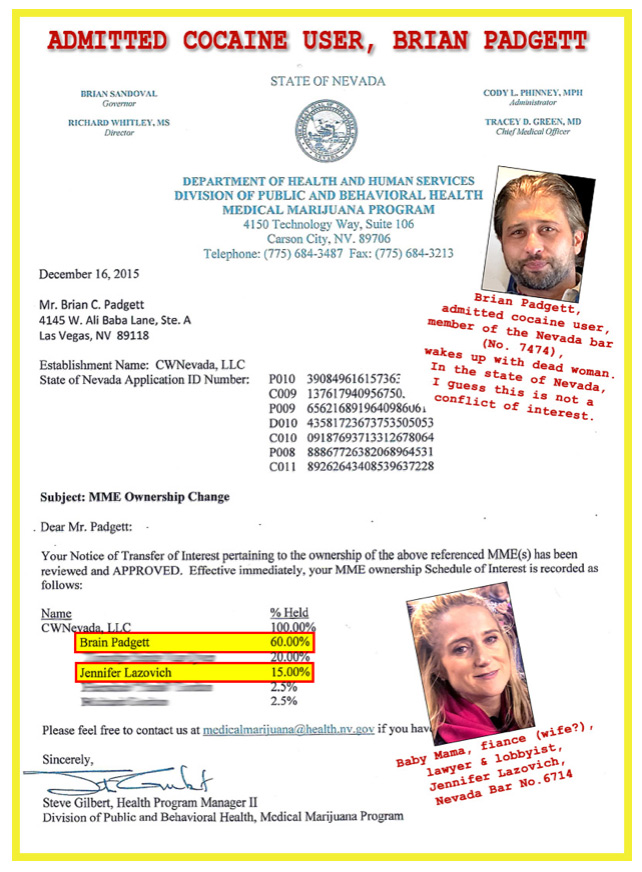 Brian C. Padgett’s relationship with Las Vegas attorney, Jennifer Lazovich, Nevada state Bar No. 6714, is a bit of a mystery.

Is Lazovich Brian Padgett’s girlfriend, fiancé or wife? We certainly know she’s his “baby mama” as the mother of his son. But what her exact relationship is with Padgett is questionable due to the lack of Padgett’s ability to be candid (in other words he constantly lies, in my humble opinion) about anything and everything.

We also know that she received a sizable engagement ring in 2016 from Padgett — one that probably was worth upwards of $99,000 (we have a confidential source who reported to us the amount it was insured for — $99,000). She got it at a reputable, well known local jewelry store here in Las Vegas. Out of respect to the jeweler, I’ve withheld his identity, but if you’re interested, I have his complete information. Please contact me privately @ stevebarket@gmail.com.